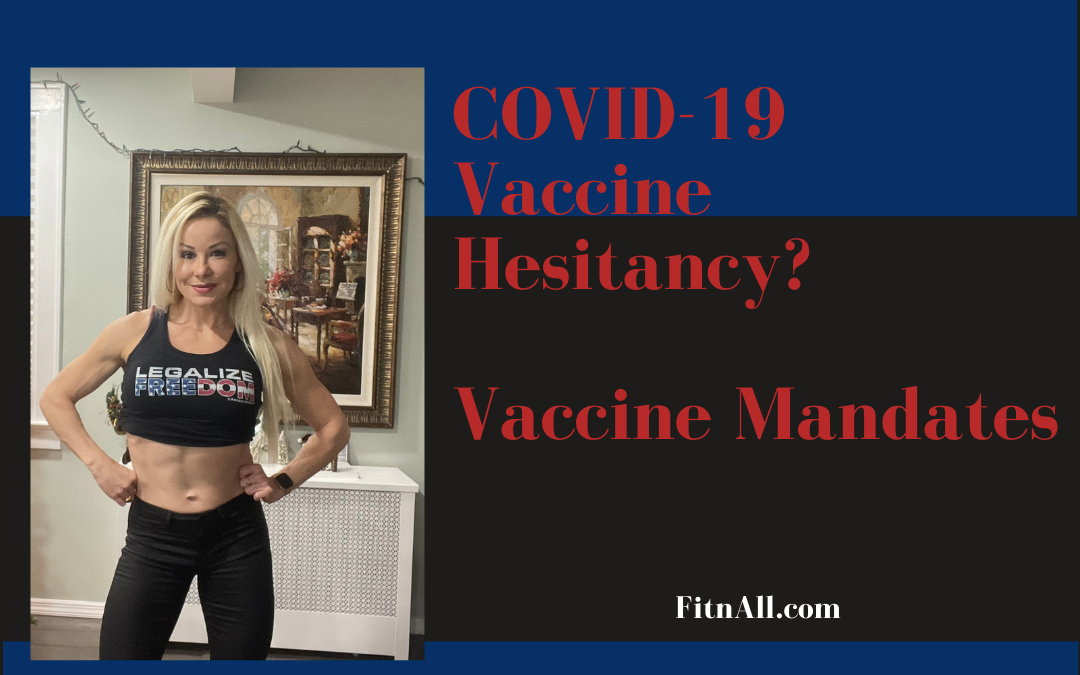 The social atmosphere and a deeper agenda contributed to the inception of COVID-19 “vaccines.” Now that vaccine mandates have been introduced around the world, it’s important to analyze a few points that surround SARS-CoV-2 shots to identify if you should be hesitant to get the COVID-19 vaccine. Previous posts dealt with vaccine safety, vaccine effectiveness, medical ethics, emergency use authorization, and big pharma. Let’s explore COVID-19 vaccine hesitancy and vaccine mandates.

In August of 2021, President Joe Biden announced a new edict requiring all government employees, employees working at places with over a hundred individuals, and health care workers to take the COVID-19 “vaccine.” These mandates are unprecedented. We have never seen a call for mass vaccination of this scale before, much less involving coercion.

Even though mandates are commands given by someone in political authority, they aren’t law. For a law to take effect, it must be passed and approved by Congress. Just because the president or governor issues mandates, it doesn’t mean that they are enforceable by law. Even if most people follow them and comply with them, this doesn’t mean that they have gone through the legislative process. Mandates can be challenged in the judicial system.

This is not the first time mandates or laws related to our health have been imposed on us. Currently, several states have laws requiring health care employees to be vaccinated against certain diseases (measles, mumps, rubella). Likewise, children are required to meet their state immunization requirements upon entering public school. However, most states allow medical and religious exemptions.

Throughout the years, we have seen several cases. In a 1905 case, Jacobson v. Massachusetts, the U.S. Supreme Court upheld a state vaccine mandate that required vaccination because of a smallpox outbreak. Mr. Jacobson was fined for refusing to be vaccinated. He challenged the law in relation to its constitutionality and concerns about the vaccine’s safety and efficacy.

The Court didn’t get into the safety and efficacy of the vaccine but upheld the ruling as a “reasonable regulation of public health and safety,” concluding that “upon the principle of self-defense, of paramount necessity, a community has the right to protect itself against an epidemic of disease which threatens the safety of its members.” The court decided that the mandate was appropriate and justified due to the fact that the smallpox outbreak posed a real threat to people in the state. In this case, the community’s wellbeing trumped the rights of the individual.

One thing to keep in mind is that smallpox can be a serious and sometimes fatal disease.  There are four types of smallpox: variola major; variola minor (mild and occurring in previously vaccinated persons); flat; and hemorrhagic. The most frequent type of smallpox, variola major, is severe and has a fatality rate of about 30%.  Variola minor is less common and has a death rate of <1%. Flat and hemorrhagic smallpox are uncommon but are usually fatal; however, vaccination doesn’t provide significant protection against them.

So the most common form of smallpox has a fatality rate of 30%, which is much more severe than the current virus. SARS-CoV-2’ fatality rate is 1% for most adults, except for people over age 69 whose rate is 5%. SARS-CoV-2 rates are more similar to those of influenza than those of smallpox. Taking into consideration these numbers, vaccine mandates can’t be justified. Mass vaccination for the flu has never been mandated and these “vaccines” shouldn’t be mandated either.

Under the Model Act, vaccination can be authorized during a public health emergency when vaccines “protect against and prevent the spread of infectious disease” and exemptions “for reasons of health, religion, or conscience” are accepted but individuals can be subject to quarantine. However, vaccines can’t “be such as is reasonably likely to lead to serious harm to the affected individual.”

If we consider the Model Act, the current “vaccine” mandates can’t be justified because they don’t qualify under the statute ⤵️

In the federal arena, the government has justified mandates citing that Congress has the power to regulate commerce between states and countries. Under the Public Health Service Act (PHSA), the Department of Health and Human Health Services is authorized to enforce regulations “to prevent the introduction, transmission, or spread of communicable diseases,” by adopting quarantine and isolation measures but not vaccination.

There are no authorized mandatory vaccination programs at the federal level, except in a few cases. Vaccination requirements do exist for some federal employees and immigrants seeking entry into the United States. Simultaneously, the military has authority when dealing with its military and civilian personnel. Military regulations require American troops to be immunized against a number of diseases; plus, other vaccines are required depending upon troop specialties or assignments.

In addition, mandating an experimental product violates medical ethics and the Hippocratic Oath. Physicians are supposed to do no harm which means that if a treatment has the probability to cause great harm, it shouldn’t be given to a patient. Physicians are also discouraged from coercing patients into getting any treatment and mandates involved coercion.

Currently, we don’t have long-term data related to these shots’ possible side effects. Since clinical testing of these experimental shots is ongoing, it’s impossible to know all hazards associated with COVID “vaccines” and give real consent. These mandates infringe upon people’s prerogative to refuse treatment and give informed consent.

Mandates & The Emergency Use Authorization

The emergency use authorization (EUA) statute prohibits the forced administration of an experimental biologic (vaccine). People involved with EUA products are supposed to do so on a totally voluntary basis and require informed consent.

COVID-19 “vaccines” shouldn’t even be used under the EUA statute since there are successful treatments available and there is no national health emergency at this moment. Besides, their benefits don’t outweigh the risks of the virus; they cause more harm than the “emergency” itself. Plus, SARS-CoV-2 shots don’t prevent infection or transmission of the virus, only lower symptom severity in some.

Vaccine mandates go against our civil rights. The 14th Amendment establishes our right to bodily integrity. This principle sums up the right of each human being, including children, to autonomy and self-determination over their own body. Therefore, the unconsented physical intrusion is a human right violation.

Bodily integrity issues have been raised in court in relation to torture, inhumane treatment, genital mutilation, sterilization, physical violence, as well as in forced medical treatment and experimentation. Any coerced action that violates bodily integrity is unconstitutional.

In relation to the recent mandate, President Biden along with OSHA (Occupational Safety and Health Administration) ordered health care workers to get the COVID-19 “vaccine” and directed businesses with over 100 employees to require workers to get vaccinated, or get tested weekly and wear a mask.

Since these edicts were unprecedented, they were challenged through the judicial system. Many states refuted the mandates and Florida sued arguing that these mandates are unlawful and a “radical intrusion on the personal autonomy of American workers.”

Upon hearing arguments, the Supreme Court blocked the enforcement of the mandate for businesses. The Court ruled that OSHA lacked the authority to impose such a mandate since OSHA “empowers the Secretary to set workplace safety standards, not broad public health measures.” It was concluded that although COVID-19 is a risk that occurs in workplaces, it’s “not an occupational hazard;” that the virus can spread anywhere people gather and poses a “universal risk no different than any other day-to-day danger such as crime, air pollution, or other communicable diseases.”

In the mandate dealing with health care workers, Biden v. Missouri, the Supreme Court ruled that Health and Human Services Secretary Xavier Becerra did have the authority to require all health care workers to get vaccinated since they work at institutions that receive Medicare and Medicaid funding. Unfortunately, the ruling was deemed acceptable to go into effect for health care workers. It is interesting that the constitutionality of the issue didn’t drive the decision, the financial aspect did. The experimental nature of these “vaccines” wasn’t even addressed, which is one of the main points making them unlawful. Therefore, the constitutionality of this ruling remains in question.

If you are hesitant to get the COVID-19 “vaccine,” you may be right to be. The sole fact that a therapeutic is being forced on the population should cause you to ponder, much more when this pharmaceutical product is experimental.

Taking into account the experimental status of COVID “vaccines”, the hundreds of thousands of adverse events reported following the shots, the inability of these “vaccines” to stop infection or transmission, and the high survival rate of SARS-CoV-2, vaccine mandates are an overreach of federal and state authorities. Medicine is being politicized and it should never be.

Officials in power are not entitled to impose edicts capriciously, much less related to medical procedures. Forcing, coercing, or intimidating people to partake in medical experimentation or face the possibility of losing their job and/or their ability to participate in civic life is unethical and unconstitutional.