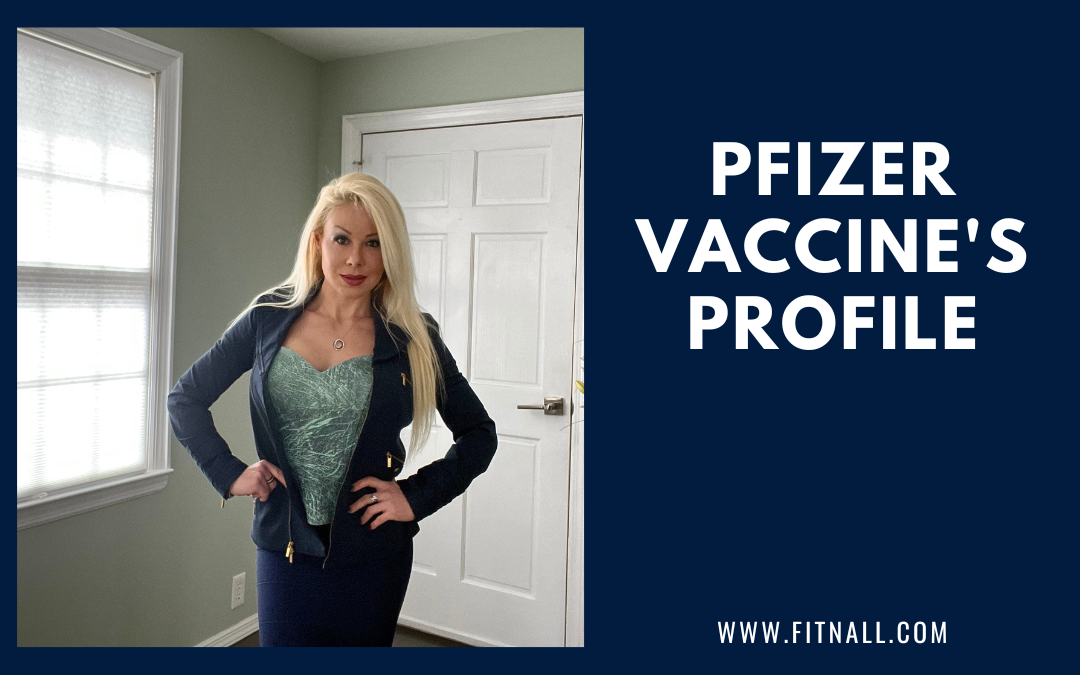 Every media outlet and government institution tells us that the Pfizer “vaccine” is “safe and effective.” Since COVID-19 shots are recommended for everyone, mandated for some, and are based on a new technology that doesn’t have a positive track record, it’s important to learn all about their effectiveness and safety. Let’s examine if the Pfizer “vaccine” has a favorable safety profile and is efficacious in preventing COVID-19.

Generally, vaccines and other pharmaceutical products have to go through different phases of clinical trials. Manufacturers have to engage in animal testing prior to human testing. This process takes between 8 to 15 years. This is the average time that takes before pharmaceutical products are deemed safe and effective and can be FDA-approved. However, this hasn’t been the case with these COVID shots.

Besides the Moderna “vaccine,” Pfizer is another major manufacturer of COVID-19 shots. They went through phase 1 clinical trials. Pfizer clinical trial phase 1 enrolled 45 participants who were subdivided into two experimental groups. The BNT162b1 group received an experimental biologic that generated a great number of adverse events and was thus discontinued. The BNT162b2 group had a dose of 100 micrograms which was discontinued after concerns were raised as well. It was concluded that during the next phase of trials participants would receive a smaller dosage of BNT162b2, making it a 30 microgram dose.

Pfizer’s clinical trial phases 2/3 are still ongoing and are supposed to last 2 years. Pfizer reported that in participants with evidence of SARS-CoV-2 infection, there was no difference in COVID-19 cases between vaccine and placebo recipients.

“COVID-19 was less frequent among placebo recipients with positive N-binding antibodies at study entry than among those without evidence of infection at study entry, indicating ~72.6% protection by previous infection,” not due to vaccination. Despite the results, it was concluded that “the data in this report demonstrate that BNT162b2 prevents COVID-19 effectively for up to 6 months post-dose 2 across diverse populations.”

Based on the information on Pfizer’s clinical trials, we can evaluate their claims. By looking at the pharmaceutical company’ methodology and assertions, it is evident that there are numerous problems with the data produced from these clinical trials:

🛑 The clinical trials offered no environmental controls. Most testing locations didn’t offer pre-screening for IgM and IgG antibodies or PCR testing for viral loads prior to giving the injection.

If participants were exposed to SARS-CoV-2 previously, they already had antibodies and had low chances of reinfection. We, also, don’t know what methods were used to test infection or transmission post-administration of the shot. Only the phase 1 trial tested antibody production resulting from their drug, which means that they are claiming efficacy from less than 45 participants – this is an insignificant sample size that’s not generalizable.

🛑  Pfizer eliminated the placebo group. According to Pfizer, they felt the “ethical and practical need to immunize eligible initial placebo recipients under EUA and according to public health authority recommendations.”

➡️ The purpose of a clinical trial is to study a treatment/variable (in this case the SARS-CoV-2 shot) by comparing its effect on two groups with a similar number of participants, an experimental group and a control group. Once the effects of the variable on the experimental group are seen, conclusions can be drawn. The control group provides a basis for comparison to assess the effects of the tested treatment.

If the placebo group was eliminated by giving participants the shot too, how can both groups be compared? How can we draw real conclusions about effectiveness if most people received the vaccine? When did the control group become part of the experimental group?

Besides Pfizer’s desire to eliminate controls, Moncref Slaoui, Ph.D., Chief scientific adviser for Operation Warp Speed, said, “it’s very important that we unblind the trial at once and offer the placebo group vaccines” because trial participants “should be rewarded” for their participation. This violates the basics of experimentation.

🛑 This was not a double-blinded study. This is when participants and researchers have no knowledge of which treatment or intervention participants are receiving until the clinical trial is over.

➡️ Researchers knew who belonged in the placebo group and later vaccinated them. Double blindness is necessary to avoid bias in data collection, analysis, or interpretation. Having a double-blinded study avoids any placebo effects as well – this is when participants perceive an effect according to the group that they are assigned to.

🛑 The results reported that the chances of COVID infection were very similar for both groups.

➡️ If the rates of infection are similar between the vaccinated and the unvaccinated, then the shot is null.  There was no specific data showing a reduction in COVID-19 infections, transmission to others, reduced hospitalizations, or reduced deaths compared to the placebo group. There is no scientific evidence to say that the vaccine is “highly efficacious in preventing COVID-19.”

🛑 There was missing data. The data of 9,400 enrolled participants is missing from the clinical trials and there was no accompanying information to explain.

➡️ 9,400 is a significant number of participants. What happened to them and their data? Were these participants removed? If so, why? Did they withdraw from the study? If so, why? Why is there no information related to the missing data?

🛑 Pfizer and BioNTech, a collaborating company, were responsible for manufacturing BNT162b2, designing, and conducting the trial. They were involved in data collection, data analysis, interpretation, and conclusions for the report.

➡️ According to the FDA, “FDA officials perform inspections of clinical trial study sites and anyone involved in the research to help protect the rights and welfare of volunteers and verify the quality and integrity of data submitted for review.”

During these trials, there was no independent analysis conducted to verify the accuracy, objectivity, and integrity of their data. The lack of outside regulation by unbiased sources is unethical. It presents a conflict of interest since pharma companies have financial interests in presenting positive results to gain approval for their experimental products.

In 2021, Pfizer’s overall revenues were $81.3billion and nearly $37billion in sales from its Covid-19 “vaccine”– making it one of the most lucrative products in history. And the drugmaker expects between $98 billion to $102 billion in 2022.

According to their documents, there were 44,165 participants over age 15 and 2,264 participants between the ages 12 to 15, and an “adverse event” document reported 42,086 case reports of adverse events. Participants received the mRNA BNT162b2 with 30 μg per dose.

According to Pfizer, there was no further reporting or concrete measurement of serious adverse events in participants. However, Pfizer was ordered by the courts to submit in-depth reports. One document submitted, Cumulative Analysis of Post-Authorization Adverse Event Report, shows the following:

Besides all the issues related to the data of the Pfizer “vaccine,” we are hearing very concerning feedback from some of the participants from the clinical trials.

As if all these red flags were not enough, whistleblowers have come forward and reported data integrity issues in Pfizer’s vaccine trials, which puts into question their claims about effectiveness and safety. Moderna whistleblowers also came forward reporting on the nature of the shot. A regional director, who was fired for reporting concerns, along with others working at Pfizer’s vaccine testing sites reported witnessing unethical procedures that compromised the study.

The following are some of the issues reported:

In May 2020, Pfizer launched a phase I/II clinical trial. By December 2020, the Food and Drug Administration (FDA) issued the first emergency use authorization (EUA) for the Pfizer “vaccine” for the prevention of severe acute respiratory syndrome coronavirus 2 (SARS-CoV-2).

By then, the FDA already had the Cumulative Analysis of Post-authorization Adverse Event Report, which concluded that “the data do not reveal any novel safety concerns or risks requiring label changes and support a favorable benefit-risk profile of the BNT162b2 vaccine.” Despite these claims, 1223 participants had died and the whereabouts of 9400 participants who reported adverse events were unknown.

Yet, it’s interesting to point out that despite this information, the FDA just repeated Pfizer’s claims, “The most commonly reported side effects were pain at the injection site, tiredness, headache, muscle pain, chills, joint pain, and fever… The vaccine is 95% effective in preventing COVID-19 disease.”

On August 23, 2021, the FDA approved the Pfizer-BioNTech COVID-19 shot. Four days later, Public Health and Medical Professionals for Transparency [PHMPT – a nonprofit made up of public health professionals, medical professionals, scientists, and journalists aiming to obtain and disseminate the data relied upon by the FDA to license COVID-19 vaccines] submitted a Freedom of Information Act Request to the FDA for all of the data within Pfizer’s COVID-19 vaccine biological product file.

When the FDA refused to release the data, PHMPT sued. A federal judge ordered the FDA to make public the data it relied on to license Pfizer’s COVID-19 vaccine within about eight months. To that request, the FDA’s legal team (U.S. Justice Department) proposed to produce 500 pages a month, which means that it would take them roughly 75 years to produce all the data. In return, the judge ordered the agency to turn over 55,000 pages a month.

Some of the documents obtained were the Cumulative Analysis of Post-authorization Adverse Event Report and the Non-Clinical Overview which has the synopsis of animal studies. Yet, there were no peer-reviewed studies exploring the outcomes of the Pfizer “vaccine” on animals presenting SARS-CoV-2.

In January 2022, Pfizer submitted a petition to intervene in the lawsuit. Pfizer’s attorneys said they wanted a role in the proceedings to help the FDA bring forth documents requested while avoiding the disclosure of confidential information. To which the FDA consented to Pfizer’s intervention, saying that Pfizer would facilitate the resolution of the matter.

The attorneys on behalf of the plaintiff commented that it is “dystopian for the government to give Pfizer billions, mandate Americans to take its product, prohibit Americans from suing for harms, but yet refuse to let Americans see the data underlying its licensure.”

The information about the adverse events that took place during the first three months of the trials, which Pfizer hid, is disturbing and should frighten everyone. The numerous missteps during the clinical trials are extremely alarming and should nullify Pfizer’s results. Claims by Pfizer and the FDA that Pfizer “vaccines” are safe and effective are not only erroneous but fraudulent. The approvals were not based on scientifically proven data on the Pfizer “vaccine.”

The FDA’s continuous attempts to hide Pfizer data only lead us to believe that there are nefarious issues at play. The FDA is supposed to be an independent organization, not a marketing arm of pharmaceutical companies -it shouldn’t be parroting the claims of the company that is trying to regulate. The conflicts of interest with pharma are huge. After taking into account all the issues related to the Pfizer “vaccine,” the only thing “safe” to say is that these gene modification shots are far from being safe or effective.