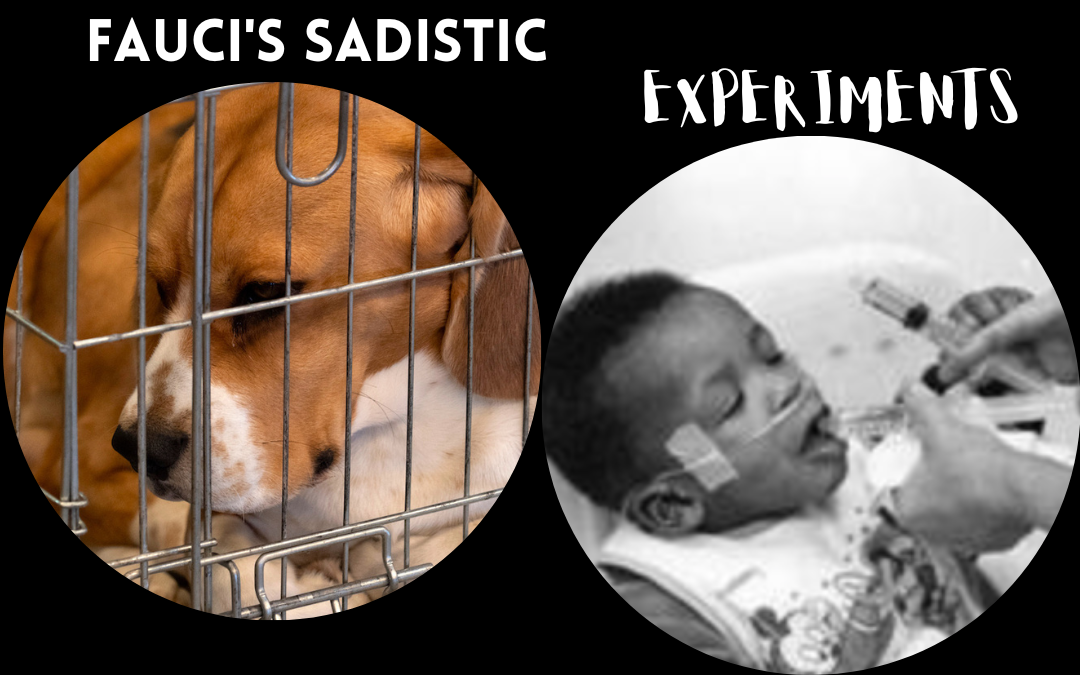 One organization that has uncovered some of the sewage that Fauci has been involved in is the White Coat Waste Project (WCWP). Their nonprofit group aims to expose and stop government spending on wasteful animal experiments.

Documents obtained by the White Coat Waste Project (WCWP) revealed that in one of Fauci’s sadistic experiments, there was a $1.2 million contract to purchase 5,000 beagle dogs and puppies over the past decade for use in brutal lab experiments.

Fauci’s NIAID Used Taxpayer Money for Dogs to Be ‘Eaten Alive’ in Cruel Experiments. WCWP reported that Fauci’s NIH division provided a $375,800 grant to a lab in Tunisia where beagle puppies placed in cages were used as bait. Their heads were placed with hungry sand flies so that the insects could eat them alive.” These flies were starved beforehand so once the flies were released would be voracious. The beagles were in those cages for nine consecutive nights.

Fauci has funded numerous abusive animal experiments. In September 2020, NIAID directed $424,455 to researchers at the University of Georgia to infect dozens of beagles with disease-causing parasites in order to test an experimental vaccine on them. According to an NIAID task order form, the 28 beagles were to be allowed to develop infections for three months before being euthanized for blood collection.

As a matter of fact, recently, The Humane Society of the United States rescued 4,000 beagles which were in the custody of a research facility. These poor dogs were being bred for pharmaceutical research and testing. This facility was found to be in violation of several federal regulations. These dogs are the kinds of animals used in Fauci’s sadistic experiments.

Dogs are not the only animals of choice for torture, Fauci’s sadistic experiments involve monkeys too. According to a WCWP document obtained via a Freedom of Information Act request, the NIAID spent $13.5 million experimenting on rhesus monkeys. The Department of Health and Human Services and NIAID paid Charles River Laboratories to breed monkeys at Morgan Island (an island off the coast of Beaufort, South Carolina). These experiments “involve injecting the monkeys with various infectious diseases, such as Ebola and the Lassa virus that results in hemorrhaging, pain, brain damage, loss of motor control, and organ failure.”

These types of experiments are not a one-time occurrence, “between 500 and 600 of the monkeys are shipped to NIH and NIAID laboratories” on the yearly basis. In fact, the NIH uses about $20 billion a year of taxpayer money on animal experimentation.

Even more despicable than all the above research he has funded, Fauci’s sadistic experiments also involved forcibly experimenting on babies and kids involved in the foster care system in New York City. Researchers sponsored by the NIAID used toxic AIDS drugs on these children. When children refused these drugs due to their terrible side effects, doctors used medical procedures (G-Tube) to enforce compliance. Over 500 children were used as lab rats and about 200 of them died painful deaths as a result of these experimental drugs.

Check out my article Fauci’s AIDS Experiments on Children to learn more.

Fauci’s performance has been a public health hazard for Americans. His policies have not only contributed to Americans’ health decline but he has used taxpayers’ money to fund contentious research for decades. Fauci’s sadistic experiments has involved innocent children and animals. These kind of research should not only be banned, but criminalized.