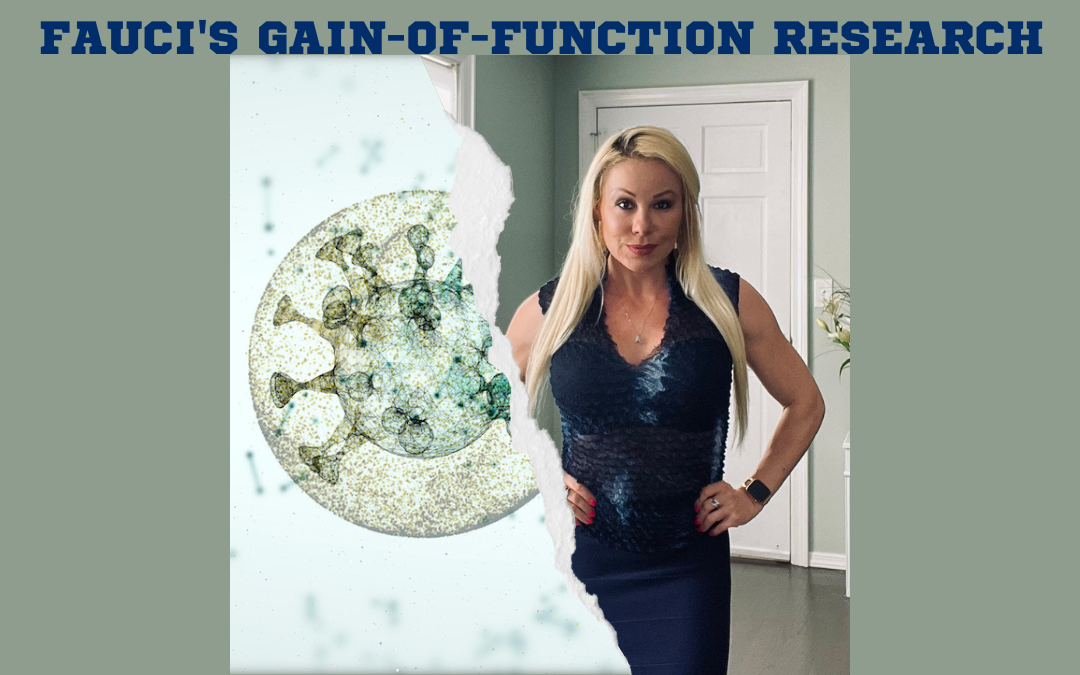 In October 2012, Fauci argued in the American Society for Microbiology that conducting experiments on contagious viruses to increase their potency was worth the risk, even if the work could accidentally lead to a pandemic. What Fauci was advocating for is called gain-of-function (GOF) research.

GOF research focuses on manipulating viruses and making them more powerful – more transmissible and deadly to humans. Gain-of-function experiments were the ones being conducted at the Wuhan Institute of Virology (WIV) in China when the COVID-19 pandemic first started. It’s believed that the outbreak that ended up killing millions emerged from a lab accident in Wuhan.

The NIH and NIAID Fauci funded gain-of-function research for decades. Vanity Fair exposed the evidence obtained from a FOIA request (more than 100,000 internal NIAID and EcoHealth Alliance documents, including budgets, staff and board meeting minutes, internal emails, reports, and interviews with five former staff members and 33 other sources).

Documents show that Fauci has been involved in funding GOF research through EcoHealth Alliance Chief (Peter Daszak), the Wuhan Institute of Virology (Chinese research organization that collaborated with EcoHealth Alliance in the past and was listed as a subcontractor on NIH, NIAID, and DARPA grants), NCU Ralph Baric (molecular biologist and professor from the University of North Carolina- Chapel Hill, who worked on GOF research for decades).

Here is the timeline showing Fauci’s involvement with gain-of-function research:

2005: Daszak and two well-known scientists (Zhengli-Li Shi & Wang) did field research in China. They co-authored a paper about the origin and transmission of SARS-CoV (Severe Acute Respiratory Syndrome Coronavirus which emerged in 2002 and caused at least 774 deaths worldwide) and they established that bats were a likely reservoir for SARS-like coronaviruses. They went on to collaborate on 17 papers.

2009: EcoHealth Alliance received $18 million for a five-year project and allocated $1.1 million to the Wuhan Institute of Virology (WIV).

2013: The same group of scientists reported that a SARS-like bat coronavirus, which Shi isolated in a lab, might be able to infect human cells without first jumping to an intermediate animal.

2014: Fauci gave a $3.7 million grant to EcoHealth Alliance knowing that they were collaborating and running these experiments at the Wuhan Institute of Virology, China. They supposedly were “Understanding the Risk of Bat Coronavirus Emergence,” gauging the risk of bat viruses infecting humans.

2014 was the year when the moratorium on funding “gain-of-function” (GOF) experiments took place. The federal government paused research that aimed to create new potential pandemic pathogens (PPP) – novel microbes that combine likely human virulence with likely efficient transmission in humans – due to controversial GOF research on H5N1 viruses in 2012. Letters were sent to 14 institutions instructing them to halt projects.

2015: Shi mixed components of SARS-like viruses from different species, which were able to directly infect human cells. Shi and Ralph Baric collaborated on a paper, “We generated and characterized a chimeric virus expressing the spike of bat coronavirus in a mouse-adapted SARS-CoV backbone. The results indicate that group 2b viruses encoding the SHC014 spike in a wild-type backbone can efficiently use multiple orthologs of the SARS receptor human angiotensin converting enzyme II (ACE2), replicate efficiently in primary human airway cells and achieve in vitro titers equivalent to epidemic strains of SARS-CoV” … Several scientists flagged this gain-of-function research as “too risky to pursue.”

February 2016: At the workshop, Rapid Medical Countermeasure Response to Infectious Diseases: Enabling Sustainable Capabilities Through Ongoing Public- and Private-Sector Partnerships, there were some interesting conversations. NIAID Fred Cassels mentioned that “over the course of an outbreak when there are many cases, the risk is much higher. As the number of cases decreases, interest in finding a vaccine starts to wane, and the risk/benefit ratio changes, making a vaccine a “harder sell” from a regulatory perspective—among others.” Daszak said, “until an infectious disease crisis is very real, present, and at an emergency threshold, it is often largely ignored. To sustain the funding base beyond the crisis, we need to increase public understanding of the need for MCMs such as a pan-influenza or pan-coronavirus vaccine. A key driver is the media, and the economics follow the hype. We need to use that hype to our advantage to get to the real issues. Investors will respond if they see profit at the end of the process.”

2016: A report sent to the NHI stated that scientists planned to create an infectious clone of MERS and that the grant had already been used to construct two chimeric coronaviruses similar to SARS.

Daszak’s EcoHealth Alliance was the one who had pitched to the NIAID that riskier study using Middle East Respiratory Syndrome (MERS – a novel coronavirus found in camels that emerged in Saudi Arabia in 2012 and killed 35% of the infected humans). He proposed that if any recombined strains showed 10 times greater growth than a natural virus, he “will immediately stop all experiments with the mutant.”

January 17, 2017: At the Pandemic Preparedness event at Georgetown University, Fauci said, “No matter what, history has told us definitively that [outbreaks] will happen… The thing we’re extraordinarily confident about is that we are going to see this in the next few years.”

January 2018: Letter in the Wuhan Institute of Virology’s Journal, Virologica Sinica, reported that 6 out of 218 villagers had tested positive for coronavirus antibodies.

2018: Daszak appeared on Chinese TV talking about his work with China, “the sequence data is uploaded onto the internet free for everyone to read, very open, very transparent, and very collaborative.” Yet, when COVID-19 took over the globe, the Chinese government refused to investigate the virus’s origin or share data from early patient cases. The WIV took down its database of some 22,000 virus samples and sequences.

October 18, 2019: Prominent individuals (from Facebook, the Bill & Melinda Gates Foundation, the World Economic Forum, Johns Hopkins University, the UN, pharmaceutical companies, and other key organizations) convened in New York at Event 201. This was a pandemic exercise where they discussed plans of action to deal with an upcoming coronavirus pandemic, highlighting a synchronized response and upcoming challenges, such as how to make people comply with proposed regulations and how the media could intervene.

November 2019: Workers at the WIV fell ill with symptoms “consistent with SARS-CoV-2 or Covid-19″ according to documents from the State Department, Wall Street Journal reported. The virus began circulating in the Jianghan district of Wuhan, and the first case of the identified SARS-CoV-2 was confirmed on December 8th, 2019.

January 2020: The CDC confirms the first case of COVID-19 in the US, specifically in Washington state.

May 11, 2021: Fauci lied under oath once again, “The NIH and the NIAID has not ever and does not now fund gain-of-function research in the Wuhan Institute of Virology.” Yet, now all documents show that the NIH and NIAID have been funding research at Wuhan (WIV) that involved manipulating coronaviruses in ways that made them more lethal, which is the definition of gain-of-function (GOF) research.

October 20, 2021: The NIH admitted to funding gain-of-function research on bat coronaviruses at China’s Wuhan lab in a letter to Rep. James Comer (R-Ky). The NIH said that EcoHealth Alliance Daszak’s “limited experiment” tested whether “spike proteins from naturally occurring bat coronaviruses circulating in China were capable of binding to the human ACE2 receptor in a mouse model” but the results of the experiment were unexpected and not “what the researchers set out to do.”

November 4, 2021: Senator Rand Paul confronted Fauci for lying about his funding of GOF research. He was also exposed for changing the definition of GOF research on the NIH website to continue to cover up his involvement in these risky experiments.

The Lancet COVID-19 Commission was launched on July 9, 2020, to help governments, UN institutions, and society as a whole respond effectively to the COVID-19 pandemic. The wanted to propose practical solutions related to interventions (treatments), humanitarian emergencies (poverty, hunger, mental distress caused by the pandemic), public finances, and the world economy in sustainable ways.

Prof. Jeffrey Sachs, the Chair of the Lancet’s COVID-19 Commission, believed in the theory of the natural origin. He named Daszak the head of the task force but removed him later on for not being forthright about his research and his financial ties to the Wuhan Institute of Virology. He mentioned how many prominent scientist started turning their backs on him and obfuscating the inquiry as he continued to dig deep.

Prof. Sachs ended up changing his mind. In October 2022, he concluded that research of extremely dangerous biotechnology is being supported by the United States government. Additionally, he thinks that there is clear proof that Fauci, members from the National Institutes of Health, and many from the scientific community are preventing a thorough investigation into the origins of the virus.

After encountering much corruption and deflections, Prof. Sachs is calling for an independent inquiry into the origins of the SARS-CoV-2 virus. He is urging for accountability because this research is putting people’s lives at risk. Now he believes that SARS-CoV-2, the virus responsible for COVID-19, probably “originated through dangerous virus research gone awry.” Watch his interview.

Following the money, the sequence of events, the documents incriminating the subjects mentioned above, and the physiology of SARS-CoV-2, a lab leak is a logical conclusion to the origination of the pandemic.

There is so much evidence linking Fauci, Daszak, and Baric to the lab leak that Make Americans Free Again and attorney Tom Renz filed a lawsuit for the creation and cover-up of SARS-CoV-2. In actuality, these extremely dangerous experiments which can be used for biological warfare violate 18 USC § 175, which prohibits the development of biological weapons. Taking into consideration the carnage that has taken place after this manufactured virus, this type of research should be banned.

Fauci’s performance has been a public health hazard for Americans. His policies have not only contributed to Americans’ health decline but he has used taxpayers’ money to finance contentious research for decades. Now, we have the evidence to show that the NIH and Fauci funded gain-of-function research here and at the Wuhan Institute of Virology and he should be hold accountable. Following the leak, Fauci proceeded to cover up the origins of Covid-19.

🛑 Some of the prominent panelists at the Workshop in 2016, Rapid Medical Countermeasure Response to Infectious Diseases, were also involved in the cover-up of the origin of Covid-19: