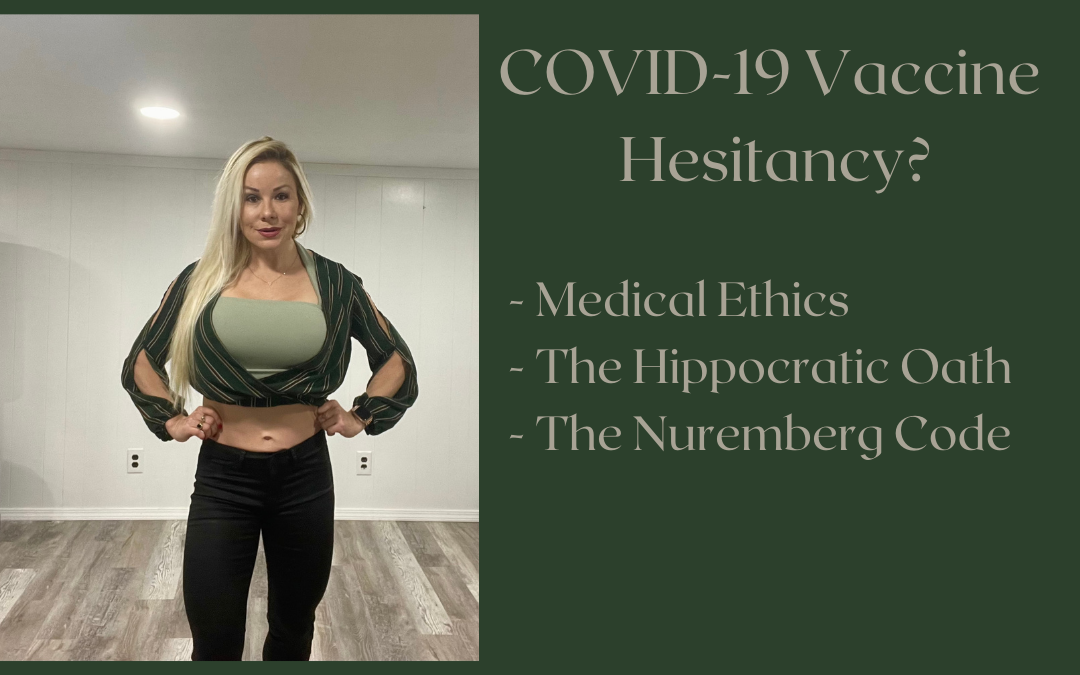 In my article, Our Social Atmosphere and The Inception of COVID “Vaccines,” I delved into the social environment of fear created around SARS-CoV-2 as well as death rates, and treatment. Now that vaccine mandates have been introduced around the world, it’s important to look at some of the reasons that can cause COVID-19 “vaccine” hesitancy. Previous posts dealt with vaccine effectiveness, vaccine safety, emergency use authorization, big pharma, mandates, incentives, and Fauci. This article explores medical ethics.

Now that we are encountering one of the biggest campaigns for mass vaccination all around the world, it’s important to keep in mind moral principles. In doing so, let’s examine the Hippocratic Oath, the Nuremberg Code, and medical ethics involving COVID-19 vaccines.

Since 1847, the American Medical Association (AMA) has disseminated several values related to physicians’ conduct and treatment of patients. There is an established Code of Medical Ethics that doctors and scientists in the medical field should follow. The code deals with issues related to doctor-patient relationships, patients’ privacy, patients’ decision-making rights, informed consent, and improved care. Codes of ethics are meant to provide a basis and guidance for those involved in the medical field.

As you can see, the Hippocratic Oath urges physicians to respect patient confidentiality, provide humane treatment to patients, concentrate on healing while avoiding conflict of interests, and help patients take preventative measures so they can avoid disease. The Hippocratic Oath advises physicians to avoid playing God or being a know-it-all, as well as to refrain from harming patients. These are concepts that physicians should follow in their professional life to be considered doctors of moral character.

However, the practice of medicine seems to be tainted and negatively influenced by pharmaceutical forces, insurance companies, and bureaucrats in power. The Do No Harm principle is not being followed. Physicians all over the country are refusing to provide life-saving protocols, such as safe inexpensive repurposed drugs (ivermectin, hydroxychloroquine, chloroquine, azithromycin) to treat SARS-CoV-2 – just because bureaucrats, Dr. Fauci, say that they are not specified to be used for this virus.

Most physicians are using treatments and drugs that cause more harm than good. When people are admitted to the hospital and given a COVID-positive diagnosis, they are receiving remdesivir (more side effects than healing properties) and they are put on ventilators (early invasive mechanical ventilation is associated with increased mortality). These protocols are endorsed by the CDC, the NIH, and Fauci and have caused more harm than good to patients during this pandemic.

At the same time, medical authorities keep pushing the experimental genetic modification shots despite the countless adverse effects that they are causing. We are even seeing that physicians are refusing to treat unvaccinated people. Additionally, when people are showing up at ERs complaining of side effects related to the COVID shot, some doctors are dismissing them, telling them is “in their head” (Kyle Warner, a 29-year-old professional mountain bike racer, developed pericarditis, POTS, and reactive arthritis, Maddie, a 12-y-o, has been hospitalized several times and now requires a tube through her nose that carries her food and medicine, and a wheelchair for assistance). All these are violations of the Hippocratic Oath and medical ethics.

Another series of rules of conduct that we should consider when exploring medical ethics involving COVID-19 vaccines are issues related to the Nuremberg Code. This is a set of principles dealing with ethics in human experimentation. The Nuremberg Code was created as a result of the Nuremberg trials at the end of World War II.

The Nuremberg trials were a series of military tribunals held in Nuremberg (Germany) by the Allied forces under international law. During these trials, prominent members of the Nazi Party leadership were tried and prosecuted for war crimes. These individuals were leaders in the government, military, business, and medical fields, who were accused of planning and carrying out the Holocaust. Many of them were sentenced to prison or death.

Hundreds of German doctors under Hitler’s regime conducted medical experiments on the Jewish population, these were atrocities. The Nuremberg Code was created to prevent right-out torture and future medical malpractice. The code has been ratified by the 1964 Declaration of Helsinki, further codified in the US Code of Federal Regulations, and adopted by the FDA.

The following are some of the most important declarations from the Nuremberg Code:

One of the Nuremberg Code’s tenets is informed consent. This entails that people must receive sufficient information prior to being part of human experimentation. Participants in clinical trials should know the duration, purpose, method, all possible hazards expected, and effects on their health, which may come from their participation in the experiment.

➡️ Most people who receive the SARS-CoV-2 shot are not receiving all information related to the possible side effects of these gene therapies or the duration in which they should have to engage in taking the shot or boosters.

Another tenet is the right of refusal. It states that people have the right to refuse participation in an experiment or medical treatment. People taking part in experimentation must do so by exercising free will, without experiencing any force, fraud, deceit, duress, or coercion of any nature.

➡️ Currently, people’s right of refusal to take part in experimental shots is compromised because they are being threatened and/or coerced to do so. Authorities are mandating these vaccines for some workers and/or coercing others to take them or they run the risk of losing their jobs and their ability to participate in civic life. Forcing people in any way to participate in experimental vaccination is unethical, unconstitutional, and violates the Nuremberg code.

Experiments should be designed and based on the results of prior experimentation such as animal studies. This helps to anticipate possible results for humans and prevent unnecessary harm.

➡️ The COVID-19 “vaccines” did not go through the normal procedures of experimentation. These “vaccines” were launched after 8 months when it generally takes 8-15 years until a pharmaceutical can be used by the public. Additionally, current shots have not been tested in animals – animal trials must precede human clinical trials in order to avoid harming the public unnecessarily.

The degree of risk taken during an experiment shouldn’t exceed that of the problem that it’s trying to solve. No experiment should be conducted, where there is a reason to believe that death or disabling injury will occur; except maybe when the experimental physicians /scientists are willing to serve as subjects. And when the possibility of injury, disability, or death exists, there should be proper preparations in place to protect participants.

➡️ The “cure shouldn’t be worse than the disease.” Having a virus with a high survival rate (over 99% for most individuals under age 70) doesn’t justify the use of a pharmaceutical that can cause myocarditis, strokes, clotting disorders, vaccine-associated enhanced disorders, or death.

During the first three months of Pfizer clinical trials, there were 1223 deaths post-vaccination as well as numerous adverse events. These warning signals were ignored and even hidden. Generally, when there are 50 deaths associated with a pharmaceutical product, the product gets removed from the market. During these trials, participants who experienced adverse effects were dismissed and told that what they were experiencing was not related to the shot.

At this point, having surpassed 28,859 deaths and 2,176,799 adverse events, SARS-CoV-2 shots should be recalled because they need to be properly and ethically tested for years. At the present moment, mass vaccination should stop due to its low safety and effective profile.

In September of 2021, during an International Alliance of Physicians and Medical Scientists’ summit, 11,990 ethical doctors and scientists signed the Physicians Declaration. This took place due to the current state of affairs and the imminent threat to humanity created by COVID-19 policies.

Based on their cumulative experience, 20 months of research, millions of patients treated, hundreds of clinical trials performed, and scientific data shared, they demonstrated and documented their understanding and success in fighting SARS-CoV-2. While upholding the Hippocratic Oath, they reached a consensus on the three foundational principles below.

IT IS RESOLVED, THAT HEALTHY CHILDREN SHALL NOT BE SUBJECT TO FORCED VACCINATION

IT IS RESOLVED, THAT NATURALLY IMMUNE PERSONS RECOVERED FROM SARS-CoV-2 SHALL NOT BE SUBJECT TO ANY RESTRICTIONS OR VACCINE MANDATES

IT IS RESOLVED, THAT ALL HEALTH AGENCIES AND INSTITUTIONS SHALL CEASE INTERFERING WITH PHYSICIANS TREATING INDIVIDUAL PATIENTS

Scientists and physicians who practice medicine ethically, aiming to avoid harm to patients and to help them heal, believe that violating the principles described above unnecessarily and directly puts people at risk of dying. They recommend that authorities worldwide legislate or take executive action to prohibit the three practices described.

Just like with the Physicians Declaration, with the Great Barrington Declaration, many infectious disease epidemiologists and public health scientists (928,000 up to date) reported their concerns about the damaging health consequences, physical and mental, of the prevailing COVID-19 policies. They are concerned about medical ethics involving COVID-19 vaccines and recommended a Focused Protection Approach.

They stated that vulnerability to death from COVID-19 is more than a thousand-fold higher in the old than the young, and is less dangerous than influenza for children. Therefore, they advocated minimizing mortality and social harm until the population reaches herd immunity. This entails balancing the risks and benefits and allowing those who are at minimal risk of death to live their lives normally to build up immunity to the virus through natural infection, while better protecting the vulnerable.

These are their suggestions:

Many of the policies established post-pandemic have violated people’s health freedoms. Not only that but the World Health Organization (WHO) is aiming to instill amendments to the International Health Regulations (IHR) – this is the public health equivalent of a “one-world government” in violation of individual nations’ and citizens’ inalienable rights and sovereignty. These amendments aim to empower the WHO to declare a global health emergency if there is a suspicion of a “potential” outbreak in any nation and push regulations, such as lockdowns, masking, health passes, and mass vaccination.

Some international organizations backing the WHO are the agencies of the United Nations, the European Union, and the World Bank which can put pressure on dissident nations and follow up with restrictions. If you are concerned about your health freedoms and oppose global health regulations, feel free to sign and share the World Freedom Declaration!

If you are hesitant to get the COVID-19 “vaccine,” you may be right to be. A reason why you should be concerned to get an experimental gene modification shot is because of the countless violations of medical ethics involving COVID-19 vaccines, as well as the infringement of the Nuremberg Code and the Hippocratic Oath that has been taking place during the past couple of years. Even if these “vaccines “ were safe and effective, procedures taking place during the clinical trials and vaccinations sites violate moral principles that were established by Hippocrates and post-holocaust. It’s time to seriously address these violations so atrocities from the past stop being repeated.